Helen Chin Lui: a Story of a Healing Spirit 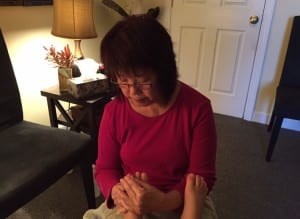 There comes a moment in each person’s life, usually close to the midlife point after working for years when we start to wonder what is the meaning of life. Why are we here? What is my purpose? For many, the question comes after children leave home, and we are forced to redefine ourselves.

During my mid-life point, I was working as an Office Manager for a small non-profit organization. The job, at first, was fun, challenging and creative, but as the years went by, it got stressful and demanding.

Any original thoughts I had to help the company grow or improve got squashed while traveling through the corporate hierarchy. My voice was no longer heard, or valued. The job became “a job”, a paycheck and a place to go.

The people I worked with were great, and I loved most of them, but the environment was chaotic and extremely toxic, and it grew worse each year. No one could agree on policies or systems. Because everyone was afraid of making a wrong decision. We would meet to discuss the most minor topics, such as what color toilet paper to buy. (Yes, that was a meeting agenda item.) We would meet for the sake of meeting.

Eventually, I understood it was time to go when I realized there was no satisfaction in the job and that I was only trudging on out of routine, a paycheck, and fulfill my workaholic tendencies.

I wanted to go, but I was too lazy to start looking for a new job. I didn’t want to change my routine. I didn’t want to learn to “groove” with new people. There were many excuses, and I recognized my spirit was dying, I still did NOTHING about it.

Then the signs to go started appearing! Normally, I am a healthy person, going years without catching common ailments. By the third year and up to the time I left, I would catch two or three ailments a year, colds, flu, frozen shoulder, tendonitis in both elbows, chronic yeast infections and numerous sciatica flare-ups. The staff would name office’s ailments after me  “Chin-Lui Flu” or Chin-Lui Cold”. Funny, but NOT!

With each doctor’s visit, no real explanation other than I overused my limbs, I was too stressed; I was exposed to too many allergens. My doctors gave me medication and prescriptions for physical therapy. So I followed the tradition way of healing. After a while, the medications didn’t help anymore. My body began to weaken. I didn’t want to listen to my body, but I was willing to fight my illnesses so that I could go to work every day.

My body told me it was time to leave, but where? As dysfunctional as the job was, it had all the right appearance of a great job. It paid well and had reasonable time demands. The proximity to my house was just right. But I was so UNHAPPY!

The doctors labeled him with Obsessive Compulsive Disorder (OCD). His main obsession was symptoms similar to Body Dysmorphic Disorder (BDD.) He was obsessed with his quickly changing body and how it looked. He believed that his face was contorting and changing constantly. He asked everyone he came into contact with if he was changing, or did he look the same as he did a minute earlier. It didn’t matter who he asked or how many times he asked. He repeatedly asked the same questions several hundred times a day. He needed constant validation that he wasn’t changing.

During these difficult years, we saw an array of doctors, psychologists, psychiatrists, cognitive behavior specialists, and internists. Doctor after doctor for OCD, depression and anxiety. No one had real answers, but they were ready to dispense strong medication, Selective Serotonin Reuptake Inhibitors (SSRIs) . Each prescription took time before we knew if it worked or not. Eventually, all medication took a toll on his body, mind, and spirit.

As time passed, frustration turned into agony, anger, and despair. We hit the wall with traditional medical. In fact, the symptoms became worse. We eventually ran out of people to ask for help.

I knew it was time to turn to the God and the universe for help. I couldn’t stand to see my loved one suffer anymore. I asked for God’s assistance.

My prayers were answered in three ways –

First Prayer: During a desperate search for the right doctor to help my loved one, I met a psychologist (I can’t remember her name) who suggested that he test for food allergies. She believed that food allergies could cause a variety of health, anxiety and emotional problems.

Even though he ate well, we learned that my love one was deficient in many nutrients, especially Vitamin D. He was also allergic to wheat and gluten. He made changes in his eating habits to kill off food allergens by incorporating a new diet that was gluten-free, less dairy and minimal sugar.

It took two years before nutrient deficiencies erased. His mood improved, anxiety and his obsessive-compulsive tendencies decreased and became manageable. Today, my loved one lives a productive life. He is employed in the traditional health industry, and he plans to go further his education in the medical field.

Second Prayer: Through all of these health issues, I started to explore alternative healing after friends suggested it may be helpful to my loved one. It began with Reiki training in 2004, then Reflexology training in 2005, and finally Energy Medicine or Chakra Balancing training in 2006. I learned how powerful each of these healing modalities are and how they CAN activate the body’s natural self-healing ability

I discovered the secret to reclaiming our healing powers was by being proactive and not reactive! I truly believe we all have the ability to self-heal! We have more healing knowledge than we think. I believe we need both traditional medicine and energy medicine to heal from a cellular level.

Third Prayer: What happened to my job? The universe answered that prayer too. The company went through many changes during my last months of employment. Many positions were either downsized or eliminated. My position was downgraded to a part-time position. I could have stayed with benefits, but after thinking long and hard about my choice, I knew in my heart, it was time to go. The signs were too obvious. With my husband and sons’ blessings, I gave my two-week notice. I left on Friday, September 9, 2006, and gave myself the weekend off. I established my healing business, the Healing Place on Monday, September 11, 2006. As of 2018, the company was brought out and no longer exist (karma.)

I am so thankful that God helped me to make the decision to leave. At the time I wanted to stay at my old job for another year, but he had other plans for me. With the knowledge I gathered during the difficult years, it gave me wisdom and insights how I can help others who don’t know where to turn, feel powerless, and are suffering quietly, and alone.

I thank myself for having the courage to listen to my heart and soul. I took a couple of huge breaths and a huge leap of faith. I have never looked back.