Are You an Reiki Energy Believer? 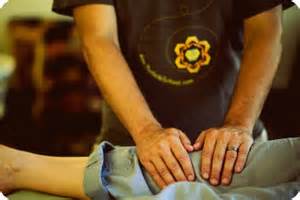 But for Reynolds, who was diagnosed with colon cancer in 2011, reiki is anything but. The practice – which usually involves a practitioner placing his or her hands on or above a client to facilitate that person’s healing energy – taught her how to quiet her mind after surgery and six months of chemotherapy.

“When you have a very stressful job and four children, and you get a diagnosis like that, it kind of really slaps you around,” says Reynolds, a certified medical assistant and managed care educator in Springfield, Illinois. “And when you’re grabbing everywhere for anything that makes the littlest bit of hope glisten, you’re apt to try anything.”

According to the National Institutes of Health’s National Center of Complementary and Alternative Medicine, reiki is a healing method based on an Eastern belief in an energy that supports the body’s natural ability to heal. There’s no evidence, the center says, that such an energy exists. Plenty of people disagree.

The word “reiki” is a Japanese term meaning “guided life force energy,” which reiki practitioner and teacher Alice Langholt likens to water: Both are in and among us, she says, and take on different forms – some heavier and some lighter. Reiki can shift this energy into balance “so that our immune systems aren’t fighting the sludge, but can keep us healthy and help us heal faster,” says Langholt, author of “Practical Reiki: for balance, well-being and vibrant health.”

Health care settings including the Simmons Cancer Institute at Southern Illinois University’s School of Medicine, where Reynolds was treated, are increasingly offering complementary treatments like reiki to help patients relax and “prime them for healing,” says Pamela Miles, a reiki master in New York who has served as the lead reviewer for the National Center of Complementary and Alternative Medicine’s page on Reiki.

It also may reduce anxiety, improve sleep and simply help people feel better so they make healthier decisions, Miles says. That was the case for Reynolds. “I’ve lost weight because of being able to calm my mind and my spirit and promote this harmony in my body,” she says.

Independent reiki practices exist, too, appealing to people seeking balance, clarity or relaxation. At Introspection: DC, a reiki and crystal healing practice in the District of Columbia, owner and reiki practitioner Tara Olowoye says a lot of her clients are young working mothers “trying to make it all work.”

And you don’t even have to go to a practitioner to try reiki. Anyone can learn to practice it on themselves, experts say.

“This is something that potentially could benefit anyone – it’s really a matter of whether or not they’re interested,” says Miles, who wrote the book “Reiki: A Comprehensive Guide.” “In my experience, when people experience the benefit, they become interested. If you try to explain to them what it is [and] how it works, then you lose them.”

Reiki is one of several therapies based on the biofield, or a type of energy field that “regulates everything from our cellular function to our nervous system,” says Shamini Jain, assistant professor of psychiatry at the University of California–San Diego.

While the biofield itself is generally accepted – it “consists of things that we can measure like electromagnetic energy that actually emanates from us,” Jain says – biofield therapies such as reiki and therapeutic touch are more controversial because they’re based on the idea of a “subtle” aspect of the biofield, which is harder to measure.

“It’s difficult for our Western science to wrap its mind around” because it’s not about popping pills, injecting needles or otherwise altering the body’s chemical composition, says Jain, a clinical psychologist who studies integrative medicine.

Indeed, reiki has its fair share of critics, who point to research that discounts the effects of reiki and other similar alternative therapies as a placebo effect. One study this year in the journal Complementary Therapies in Medicine, for example, evaluated the effect of energy healing on colorectal cancer patients and found the therapy did not improve depressive symptoms, mood or sleep quality. Only study participants who already had a positive attitude toward complementary and alternative medicine practices showed a boost in mood.

Another 2008 study in the International Journal of Clinical Practice analyzed 205 previous studies on reiki and found mixed results for its efficacy. It also noted that many studies on the topic aren’t well-designed.

Others worry that the practice is unethical, fraudulent and deceptive. “One can easily see that deception – even if not intentional – is involved in representing that a particular therapy sold to the public is effective, when there is no evidence that this is true,” says Jann Bellamy, a retired attorney in Tallahassee, Florida, who does pro bono work for organizations that educate consumers about science-based medicine.

Still, a small body of research shows promise for reiki and other similar therapies. In a 2010 study in the Journal of the American College of Cardiology, for example, Yale University researchers including Miles found that patients who received a 20-minute reiki treatment within three days after a heart attack had better moods and heart rate variability – a measure linked to post-heart attack outcome.

Survivors who received a fake therapy improved too, but not as much; both groups were less exhausted than participants who received no treatment. Notably, Jain says, the study showed that biofield healing improved cortisol variability – important for regulating immune function – while fake and no treatments did not.

The results suggest that “common sense things” such as rest, touch and being cared for matter, but “there’s something about the healing that seems beyond that,” Jain says.

The most compelling support for reiki, however, may be anecdotal – and a reason for more research funding in the area, experts say. “What we’re just beginning to understand is that, if we want to move forward with science, we can’t assume one philosophy is correct,” Jain says.

Langholt, who lives in Gaithersburg, Maryland, knows the exchange well. It happens at stoplights, when other drivers notice her window magnet advertising her practice. They say, “What’s reiki?” She says, “It’s an energy healing method for pain relief, stress release and better health.” They both drive away.

Langholt has a longer answer too. In fact, she teaches a whole course on what reiki is and how to explain it to others in terms they understand. That’s how complicated it is.

To make things more confusing, there are no standards for reiki practice or training, “which means that reiki certificates are essentially meaningless,” says Miles, who teaches the practice to medical and nursing students across the country. “People may have become reiki masters in a weekend or half an hour, they may have clicked on a website or they may have decided for themselves that they’re reiki masters.”

That’s why it’s a “buyer-beware” market, Miles says. She suggests prospective reiki clients judge practitioners by their demeanor – they should be “walking products of their practice” and not bad-mouth conventional medicine. It’s also important to ask about practitioners about their experience and whether or not they practice reiki everyday on themselves, to which the answer should be yes, Miles says.

Finally, it’s key to recognize that, although reiki has no known medical risks, it’s not a substitute for conventional medicine.

“What we see is that reiki practice brings to people what we find so elusive in our culture: peace of mind,” Miles says. “And once we have peace of mind, everything else is a lot easier. Reiki practice may not be the only thing that’s needed, but it’s a great place to start.”

About the writer – Anna Medaris Miller is a Health + Wellness reporter at U.S. News.

The Healing Place is a wellness education center located in Medfield, MA We specialize in helping clients to find relief from chronic pain, chronic digestive issues and balance hormones naturally. Our healing tools are Reflexology, Energy Medicine, Reiki and meditaiton. If you would like to learn more how our services can help you to find relief, schedule a FREE consultation on line at www.healingplacemedfield or call (508) 359-6463.